Post stories and pics about your barn finds and rare parts and accessories scores here.

joggietoolbox.jpg
You do not have the required permissions to view the files attached to this post.
fig
Kaapse Kombi Kult


I saw one of these brand new the other day at Volkspares.

Sorry Fig,
I had to.
Top

Repro. How much? Did you buy one?

I'm plastic enough, it will go well with my Fleetline.

Top up your drink and get comfortable, it's story time.

) for my collection. Along with the VW books were a two-volume factory workshop manual and two parts lists for the old 1969> Audi 100 L, LS, GL range. I had no use for them but I knew that to the right person they'd be priceless so, rather than tossing them, I set about finding someone who could use them.

After some web searching

I couldn't find any kind of classic Audi club or discussion forum or webpage in za, but a search of an A3/A4 go faster discussion forum turned up a single post by a guy looking for parts for an early 70s Audi coupe. His email address was in his profile so I mailed him and asked him if the Audi manuls would be any use to him. I got no reply.

Until several months later, when he called me a few weeks ago to ask if I still had the manuals. I offered them to him for a token amount and he came and fetched them from me the next day. Of course, he noticed the buses in my yard and we got talking about his old cars (Audi Coupe, NSU RO80, DKW 1000S) and he mentioned that he used to have a Beetle and that he still had "one of those old round toolboxes" lying around at home.

I immediately made him a market-related offer for it and he was surprised it could be worth so much. He didn't say whether he'd sell it and left. Then a week later he sent me the photograph I posted above. Still didn't say whether he was selling it, but I replied saying if he ever did decide to sell it I would be interested in buying it. Some time later he came back to me and said he hadn't planned to sell it but had decided to pass it on to someone who could use it, and that he'd done some googling on the value and he thought my offer was fair.

We did the deal today!

As can be seen from the pic, it's missing three tools (two spanners and a pair of pliers) which I'm now on the hunt for. I have other Hazet VW tools to trade!

I've been looking for one of these Hazet tool kits for myself for about 20 years. Although I've seen many of them in SA, and seen lots of people finding them, I only ever came across one other for sale, a mint Hazet Tourist kit that was for sale with a nice 1959 Beetle in about 1991. The seller wouldn't sell them separately and, though tempted, I eventually passed on the 59 bug and its tool kit. 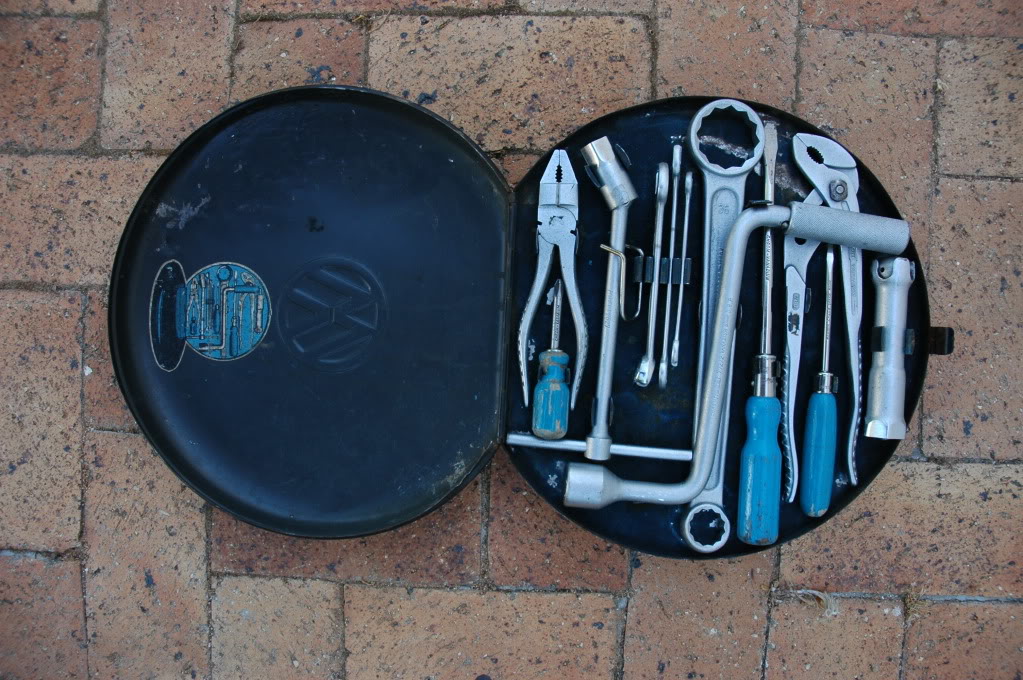 Check the missing tools, mine is complete 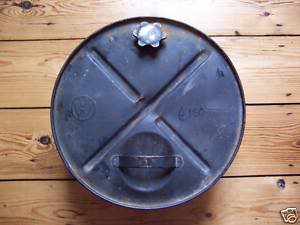 Nice tool box! And fuel can!

Your tool box is the older version with the T-socket for the fuel pump; dropped on the later versions, which have an extra spanner.

hazetvwroundtoolkit.jpg
You do not have the required permissions to view the files attached to this post.
fig
Kaapse Kombi Kult

Found a fastback that has only 2 owners from new. Previous owner bought it in 1969 and owned it ever since

If it's too low, you're too old

makes me sick all these OG toolboxes

I think my 58 beetle is a bit of a barn find, asked a guy about upholstery from that era, he tells me, why do I want such old style material, no way a car that old still has an original interior, well, errrmm, I beg to differ

Ok, its not an oval or a split, but still pretty special imho. But you have read the story....
Of course the original owners manual, sale invoice, first service invoice and parcel tray with fuel tap accessory are all pretty DARN special in my book

and before I forget.
Congrats Fig, that is an amazing find

Some 12-14 years ago I replied to a add advertising a beetle for sale in PTA.
After speaking to the dude, he was not too clued up of what he had so I left it, about 2 weeks later the dude phoned me again and asked me if I was still interested as he needed to get the car out of his driveway, and told me he would throw in a stack of engine & tranny parts, and even reduced the price on the car.
I had to go to a site visit for work a few days later and poped over to his place.
He gave me a huge amount of background on car and how he got his son into beetles and showed me photos of cars they had built etc. etc.
Once we got to a back room to look at the spares a box with what looked like a K&N filter caught my eye.
After looking at the pile of engine parts I quickly lost interest in the car, this is what was lying there.
A set of Gene Berg inlet manifolds, with the Weber 42 DCNF's & filters still atached, a 36 HP fan housing with the Gene berg linkage, a Scat pulley, a set of HD rocker shafts and 1 big valve cylinder head, an original set of Empi valve covers (not the Chinese ones you get today) as we got talking he explained to me this was all the "rubish" his son was left with after he blew up the engine, he told me the rest of the engine was lying outside.
After digging for some time we found it, it hade a huge hole on the 1 side, 1 rod blew up and took everything in it's way with it, still attached was a flywheel 2 good 92mm cylinders and all the case internals.
After doing a deal I got all the above parts for ........ wait for it .................
R450
He has asking like R1250 for a complete car (can't remember exacly) so in his eyes it was a good deal, there was a few other engine bits I took for a few Rand.
I didin't take the beetle, but he was happy with the parts deal, I was extremely lucky, and happy of course.
When I got home I stripped the block and guess what it had a Oetinger Kombi 76mm CW crank that was usable, BONUS.
All this was the basis for my first real T1 perfomance motor, a 2020cc.
It went like stink, 3 gearboxes later it also gave up the ghost at about 6000 RPM.
This was the best deal I have ever scored, I have scored a few items here & there but this was the best.

It's amazing what's lurking out there if you can just find it.

The set of manuals I mentioned was days away from being tossed out when I bought it; the person who had them didn't think there was any value in them any more.

fig wrote:....I immediately made him a market-related offer for it


fig wrote: We did the deal today!

You can never have enough Garages