Question about the south african 1600s is it true that the front windscreen and bonnet is totally unavailable? , if not where can I source these items ? Any info would be greatly appreciated, I want to build up a 1600s as I see it as a truly south african beetle , but I am worried about the unique parts to this model

from my limited knowledge on the 1600S, its only the front end which is unique to SA. It is a mix of body shapes made to host the old suspension and have the looks of the new 1303 which was available in Europe.

Think the bonnet is unique, not as wide as 1303. Rear window also larger than SA models. Reason is that the roof panel contains cutouts for both front and rear windows. (VW Germany slightly enlarged the rear window on all beetle models around 1972, but Uitenhage continued using the 60's size rear window). Front fenders same as normal beetle.

Aerodynamic coefficient improved. (On 1303 it was said to be down from 0.48 to 0.44). Slightly higher top speed and reduced fuel consumtion compared to late flat screen beetle. (As per Car magazine road test).
Do'nt assume anything- (While doing fault-finding).
"Things should be as simple as possible, BUT NO SIMPLER THAN THAT."
"If something can go wrong, it will go wrong" (Murphy's law).
Top

just to clear up

only bonnet , windscreen , and Dash are SA 1600S specific , the rest of the parts are interchangeable with any early 70s SA Beetle

Not sure why people hate on the 1600s, I've always thought it was the better looking beetle, and it truly is the most unique South African beetle

I don't think SA people 'hate' the 1600s, keep in mind it was a final attempt by VWSA to cash in on decreasing air cooled popularity prior to the shift to watercooled-only passenger models. The 1600s was never meant to replace the 'normal Beetle', and was sold as a top of the range model, side by side to the 'flat screen' models right to the end. (The last Beetle built by VWSA in Jan '79 wasn't even an 'S').

An 'S' made an appearance at the UK Volksworld Show this year, and created quite a buzz - people didn't know what it was. 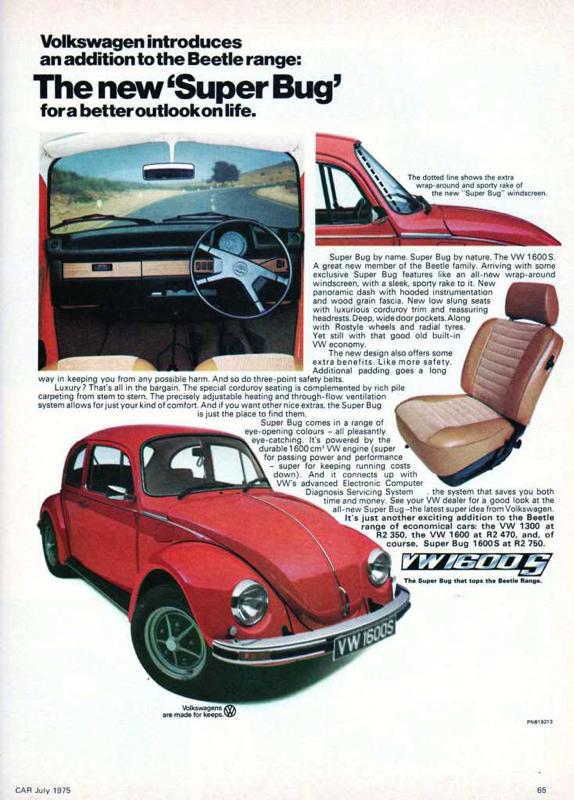